I have just received my HTC TyTN unit. Its codename is HTC Hermes. It is also known as O2 Trion, Dopod 9000, and more. 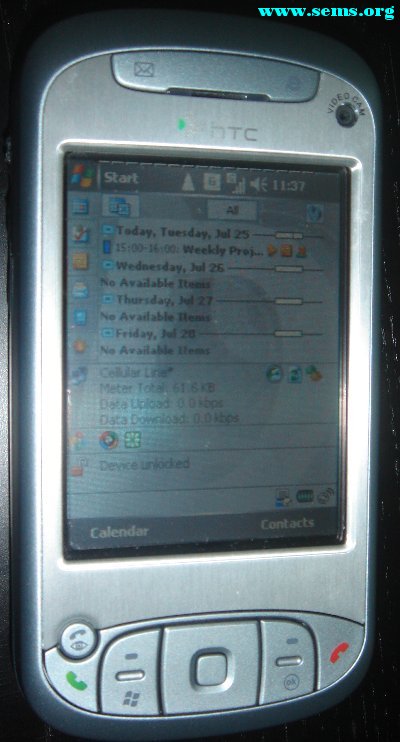 Also it has built-in backlit keyboard, mini usb port for connecting to PC and headsets, Wifi 802.11 b and g, Bluetooth (I believe it supports 2.0). 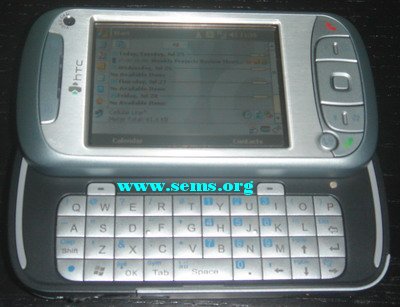 * It supports all the current GSM/UMTS bands, one of the few devices I have seen to support all of them. So wherever there is GSM, you can use the device.

* Thought it feels lighter than my UTStarcom 6700, they are approximately same weight. TyTN is slightly thinner, but longer, but there is no protruding antenna.

* The new Samsung CPU feels faster than what was on 6700, and blazingly fast compared to Kjam's TI 200 Mhz one.

* There is 56.22 MB storage in the main memory for your software installation, which is plenty.

* Keyboard has a autosensing backlight to illuminate the keys and it seems to work good.

* There a scroller key on the left side, similar to Blackberries or Motorola Q, for one hand usage. However, addition of a Ok button right beside it works well and the same button is used to bring start menu if you are on the Today screen.

* The pictures look ok with 2MP camera, its interface has been greatly improved. I'll post pics from it later on. 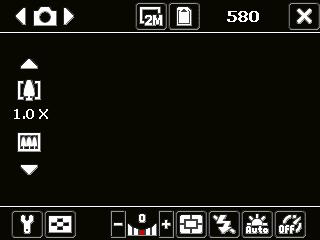 * There is plenty of buttons to customize (four on the front, one on one side, two on the other, totalling 7).

* Screen is brighter and visibility is better under direct sun light.

* The stylus, similar to Kjam's, it is tiny. Even when you stretch it out.

(btw, this shot is from the unit's camera, with flash on)

* The keys at the bottom - the video call key is too close to the green Call/Dial key. The rocker keys for left and right soft keys and Start Menu/OK don't work that well either. You think, you hit Ok, but you actually pressed right soft key. Similarly, I prefer a little joystick type dpad, it is easier to navigate with it

* 2.5 or 3.5 mm audio jack is missing. They have used mini-usb type headset - similar to Motorola V3X I believe (one stereo headset comes with unit), so if you are going use your own headset, you'll need an adapter. This is not a big issue, as I'll probably be using a Bluetooth headset anyways.

Overall I like this device, and above is my first 24 hours experience, I haven't played with it too long. I'll keep you posted on developments.

On another note, the unit comes with a ROM version 1.18, dating May 2006. For those of you who get this unit or another unit with no English ROM, you can get a copy of the Dopod 9000 English ROM with following set:

It is available on the XDA-developers.com FTP site with set of instructions. Word of the wise, during the upgrade process your device may look like not updating, especially between 15-30% part. Be patient, it is updating very slowly and it works fine. I went ahead and updated mine already. Living on the edge baby :)

Thanks for the review. I'm in the Philippines right now, and they dont have the O2 Trion here. Where can I get this unit? USA, Europe?

O2 Germany and HTC Europe has already released the unit. Also in East Asia, Dopod CHT 9000 is on sale, which is the same thing. You can even download an english rom, as I stated above, and convert a Chinese Dopod CHT 9000 into an English one.

You can also grab it online, from superiorgadgets.com, expansys.com and more.

i am definitely looking into this phone. I have a nokia 5300, but i need an upgrade, im SOOOOO looking forward to playing around with all the settings :D

good review ,but how about the battery capacity?

Digpoow, if you mean the battery life, it depends upon what you do with the device. On a daily usage, it lasts at least a day for me. The more battery sucking stuff you use, the less battery life. For example wifi will drain the battery.

Comments are locked for this entry.

This blog currently has 346 entries and 2327 comments in 9 categories.

There are 12 active users.